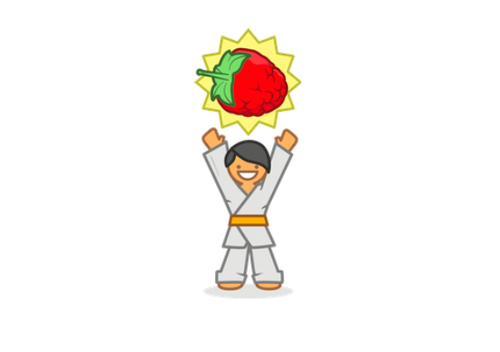 Our mission is to bring more beginners to the platform, with game-based projects, simple setup, and top-notch performance. We hope you’ll try our beta –  over the next month, we’ll optimize, integrate, and start open-sourcing all our changes and improvements this April.

None of this would have been possible without the work of thousands in the open-source community – and specifically, some truly fine hackers and educators in the Pi space. Here are the folks whose libraries and projects we’ve drawn upon while building Kano OS:

Alex Bradbury – Alex has helped us grow in a number of ways, and we used his fine work on Raspbian & Spindle to jumpstart our development.

Raspbian Community – As Kano OS is based on Raspbian, we owe huge thanks for the amazing work of developers Mike Thompson, Peter Green, and the Raspbian community.

Sam Aaron – Sam’s one of the coolest guys we know. His project to bring open-source music composition to the world has roots even beyond the Pi space, and he and Carrie Anne Philbin have put out the best educational resources yet for his tremendous project, Sonic Pi. We’ve built a new frontend for the app, and are proud to feature it in our distro. (Follow Sam here.)

Debian Community – Kano OS is a distribution of Debian Linux, and we’re proud to build on the fantastic work of Ian Murdock and the Debian community.

Google Blockly – Kano Blocks is based on Google’s Blockly, so major thanks to Ellen Spertus, Neil Fraser and the rest of the Blockly team for their excellent work in making a beginner-friendly visual programming editor.

Kano OS – the shoulders of giants